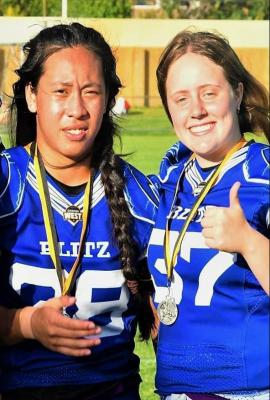 The 2019/2020 WA Gridiron season has just finished, and 2 senior students from Lakeland Senior High School were an integral part of the Perth Blitz Gridiron Club Women's team. The women's team went through the season undefeated, with a convincing 26-8 win in the grand final.

Grace McFillin and April Alan were both first year players in the sport, and excelled with the amazing athleticism and passion.

Only a week after the grand final, the Perth Blitz held their awards night, where the girls also received the following awards:
April Alan:
Women's Players Player
Rookie of the Year

These girls, at such a young age, have huge potential for the future in this sport. Congratulations April and Grace.