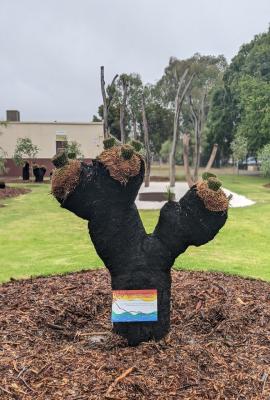 Today Lakeland SHS opened our new garden that honours the service of Indigenous soldiers from Western Australia in World War I. There are 13 soldiers that have a special place of honour in the garden as these men fought during the Gallipoli campaign. The garden, Kalyakoorl Ngoornding Boodjar, which means Forever Sleeping in Our Country was planned and developed by Mr Bruce Abbott and his team at Replant Australia and was funded through the Local School’s Community Fund with the support of Federal Member for Fremantle, Mr Josh Wilson.

There were many staff and students involved in developing the garden and many hours of work were put in to the opening ceremony today. We would like to acknowledge the leader of this initiative, Mrs Cathy Baron for her vision and passion to make the garden happen and thank all staff members and students that were involved.