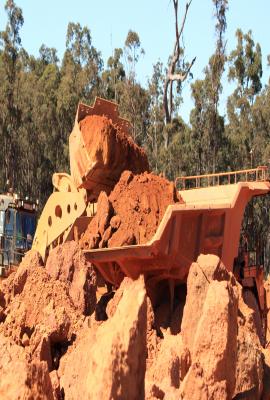 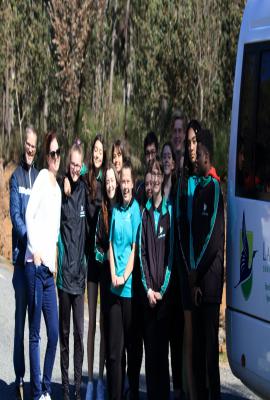 'Twas an unusually warm day on Friday the 24th of August, when the Year 11 ATAR Geography class headed out on an excursion of a life time. The sun shining bright on us, we began our one-hour drive to the community of Pinjarra, where the Alcoa Pinjarra Alumina Refinery is located, down some real country roads, where we saw some workers rights protesters and a lot of cows. The workers rights protesters seemed really friendly, though, because as we drove by they waved and the Geography class as a collective, waved back. It was a wonderful interaction.

Anyway, from there we proceeded to pull over because we were half an hour early, and the tour didn't start until 10:30am, so we got out of the little bus, or "coach" as the old lady that was leading the tour kept saying, and stretched our legs and ate some chips, kindly provided by Mrs Trevaskis, bless her cotton socks. So half an hour went of eating some salt and vinegar chips and taking in the morning sun and freshness of the country air, when Mr Prosser and Mrs Trevaskis yelled at us to mosey on back into the bus, because it was time to learn about the exportation and mining of bauxite! How exciting!

The anticipation of learning was too much for us, so you can bet your bottom dollar that it didn't take too much convincing for us to bounce back onto the bus!

After we were all safely seated, we drove further down the road, and right before our youthful eyes was the entrance to the Alcoa Pinjarra Alumina Refinery, where we waited for a bit for the said "tour guide" to meet us. The tour guide was an old, grey lady in steel capped boots, with reasonably sized pearls hanging from her old ear lobes. She explained to us that she had been working there for 40 years, and the person that was supposed to take the tour today, called in sick and given her experience and position within the company, she took the tour. That was fine by us. I mean, as long as we got to hear about the fascinating and extensive history of bauxite, the tour guide didn't really matter!

That being said, she continued to inform us for the next two hours about the production, chemical compounds and potential exportation of bauxite, all while we drove down the dirt track roads, to where production was happening. At one point, at the beginning of the tour, we went into an office, where we met Kelly, who's role at Alcoa was virtually the eyes and ears, watching and making sure things were running on track and smoothly. Her job also entailed scheduling maintenance for the machines that are used to mine the bauxite. It was most interesting.

After the two-hour tour ended, we were on our way to the Pinjarra Bakery to get some delicious treats! If you ask anyone on this excursion, they'd probably tell you that this was their favourite part of the whole experience, but let me tell you, the hot, steamy deliciousness of a steak and cheese pie could NEVER compensate for the fascinating and extensive history of bauxite that is now permanently burned into my memory. The excursion was so incredibly educational, I doubt anyone could forget it!

Once everyone was comfortably full of wonderful baked goods, it was time to begin the journey home. For the whole hour bus ride home, we spent it reminiscing the memories and education shared at the Alcoa Pinjarra Alumina Refinery and came to the conclusion that this excursion is one we'll NEVER forget!